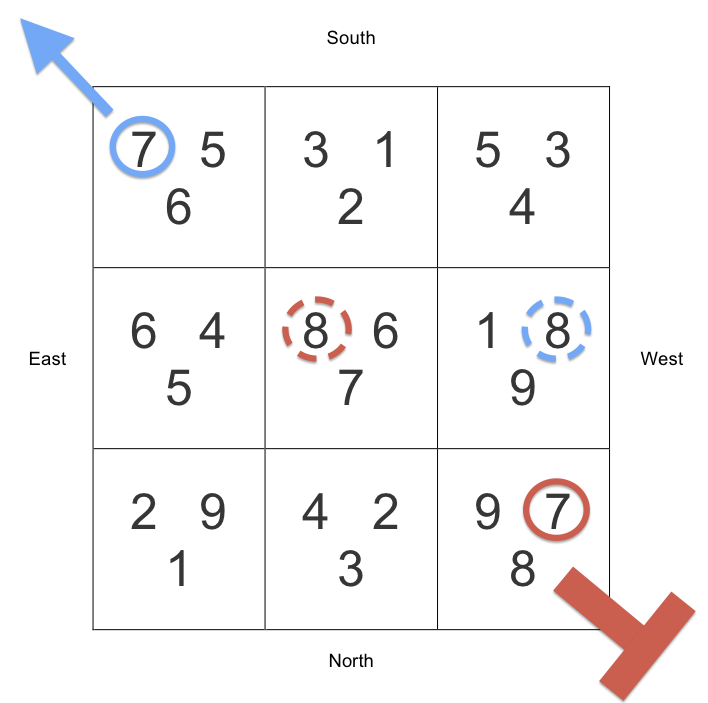 Mountain Star Sank in the Water Now consider the following Flying Star Map, do you see any differences from the Jewelry Orientations? Members please log-in to read. Not a member? Apply now for $1 only!!! Learn these master skills now![/contentbox]

This is 20th week’s content. Please wait until the 20th week of your subscription. Thanks.

Water Star in the Mountain

Again, in the same case you can see where the prevailing star locates in the Facing (Water) Direction:

The analogy is the same.  The “God of Water” is gone into the mountain, it loses its power!  Although it is still within the same Facing Direction’s box, just a sheer dislocation to the Mountain location, everything is bad.

The Effects of These Orientations

Mountain Star governs health and people.  If the prevailing Mountain Star goes to the Water location in the Mountain Direction (as indicated in red circle in the above Flying Star Map), there would be adverse effects to the health of the people living in the house.  If the building is an office or a workplace, the employees would have higher chance to get sick and the harmony of the people may be affected too.

For Facing Star, it governs wealth.  If the prevailing Water Star goes to the Mountain location in the Water Direction (as indicated in blue circle in the above Flying Star Map), the finance of people living inside may be adversely affected.  This could be realized by having more unexpected expenditures, financial loss due to investment, bad debts, etc.

Here I would like to share with you cases related to this kind of orientations, including one famous case that happened in early 20th century and more recent cases.

Mr. Wong is a friend of mine.  He is an entrepreneur who had a few factories in China that produce toys .  Mr. Wong’s company is one of the few major toy exporters in the region.

In late 1990’s he decided to open an office in Hong Kong, so that he could have better interactions with  potential customers in the South East Asia.  Besides, Hong Kong is one of cities in the world with the lowest tax rate.

Through the recommendation by a real estate agent he knew for over 20 years, he rented an office in a multi-storey industrial building in the Kwai Chung area in Hong Kong.  Wong did not asked me to check the Feng Shui at that time.

Approximately 5 months after the office opened, Mr. Wong approached me for help.  I went to his office for a Feng Shui inspection.  I believed that Wong’s office Feng Shui was bad after drawing out the following Flying Star Map of the seventh Period building: As always, the blue arrow represents the Facing Direction and the red “T” denotes the Backing (Mountain) Direction.

Let us just pause here.  After going through the first half of this lesson, do you know what the problem of this office is?  Try to test your knowledge before reading on to find out the answer below.

I said to Mr. Wong, “It seems that this is not a good office.  I believe your company must have experienced financial loss”.  Wong nodded his head.  “And there should be problem about people, like bad relationship with customers or business partners, and conflicts between your employees.  It that correct?”  I added.

Mr. Wong said, “Yes, these are the reason why I asked for your help.  The first two to three months in this office were not bad.  I’ve got a few big orders from new clients.  But since last month, these big clients started to cancel their orders one by one.  They had misunderstandings about my company’s product quality.  Besides, the new hires were not getting so well with those experienced staff I transferred from China offices.  I needed to spent quite some time everyday to resolve these conflicts.”

I said, “It is not uncommon to see offices enjoying a few good months then suddenly encounter troubles.  If you have chosen a lucky day to open your office, the good luck brought by the good day usually could counteract the bad Feng Shui in the first three months.  But after the good luck gradually fade out, you would experience the pain”.

Wong asked, “How do you know my office has these problems?”

I said, “It is not easy to explain.  In brief, the orientation of your office is bad.  This orientation is both weak in people and wealth.”

Wong asked, “Could you help me to cure this?”

I said, “Frankly speaking, the Feng Shui of this office is terrible, in the long term you should move out, say, after the lease of this office expires.  In the short terms, there are a few things I could do to alleviate the problem.  Note that I used the word “alleviate”, for such bad Feng Shui, you cannot expect Feng Shui to completely fix all problems.”

Similarly, while Flying Star 7 ought to be the Facing Star in the Facing Direction (the blue dashed circle), it appeared as the Mountain Star instead (the blue circle).  This is the “Water Star goes into the Mountain” situation, which is bad for money.

The subject tomb was built in 1918, almost 100 years ago.  This case shows how the living people would be affected by the Feng Shui the ancestors. If you have paid enough attention to this class, now you should be able to tell what’s wrong with this tomb.  The Flying Star 3 in both the Mountain Direction (in red circle) and Facing Direction (in blue circle) are bad.  They are the opposite to Jewelry Orientation.

And what happened after the tomb was built and housed a lady whose surname was Ren?  Ren’s daughter-in-law died five years later at a young age.  Two more years later, Ren’s son also passed away.  Besides, the family’s finance began to fall.

According to Chinese Feng Shui theories, the Feng Shui of a tomb affects not only the person who was buried inside but also the living descendants.  This is why chinese people spend great money to find good locations to built the tombs of their ancestors.  There are even some Feng Shui masters who only do Feng Shui for tombs.

Mr. Tan moved to a new house in 2002.  The house was built in 1987, which is a seventh Period house. Soon after his relocation, Mr. Tan discovered problems with his liver.  His son suffered from a few times of body injury when exercising.  The allergies that his wife and daughter suffered also aggravated.

Mr. Tan was an experienced investor in the stock market.  He used to earn good money but since moved to the new house, his portfolio reduced in size due to losses.  By referral, Mr. Tan found me to help.

Below is the Flying Star map of Mr. Tan’s house. You could easily figure out what the problems are.  Flying Star 7 is the Facing Star in Mountain Direction (red circle), and Mountain Star in Facing Direction (blue circle).  These are complete mismatches.  No wonder the Tan family had such a hard time.

While I tried to help the Tan family with short term remedies, I noticed that, in less than two years the house would have completely new Feng Shui due to the arrival of the eighth Period in 2004.  By then the prevailing star would become Flying Star 8.  They are located in the central and Western boxes.  The new situation creates new challenges and possible benefits.  So I also planned the Feng Shui setting for the Tan family after 2004.

Unfortunately it is not easy to fix this problem.  There are some ways to do so, but they work only under particular conditions which are dependent on the actual house’s interior and exterior environment.

Later in the Feng Shui Master Class series I will explain all Feng Shui cures in detail, but for now just remember that if you have a choice, do not choose a house with such orientations.  If unfortunately you live in such as a house or work in such an office, relocate if possible.  This is my honest advice.

See you next week!