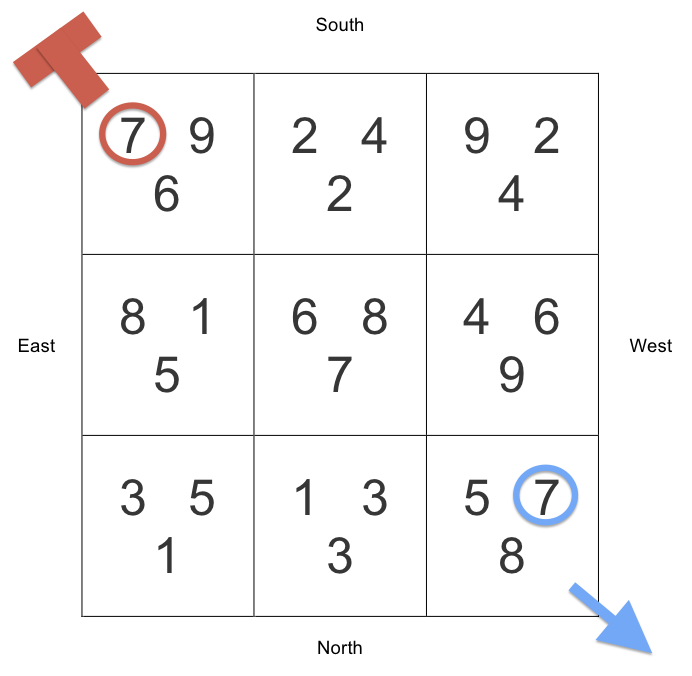 In the last lesson we have discussed how to assign the Mountain Stars and Facing Stars to the nine boxes of a Flying Star Map.  Trust that you have practiced and memorized the procedures.  It is not easy to memorize them all, but it is a critical requirement for all people who want to learn Flying Star Feng Shui.

Despite this, from time to time I am being asked by students on whether there is any simple solutions.  Can we skip the difficult Flying Star allocation process and all the things to remember while still could do Flying Star Feng Shui?

In the past, Feng Shui masters all calculate the Flying Star Maps by themselves.  Nowadays, we think there are simply easier methods to do so.  One of them is to do it by computer.  There are computer softwares in the market that do the maths for you, you simply need to input the year the building was built and the facing and mountain directions, the software could generate the Flying Star Maps for you immediately.

However, this kind of software is usually not cheap and most of them have Chinese user interface only.  To help you all to get through the difficulties, I have prepared a special gift.  It is a compilation of all Flying Star Maps of the 24 Mountains in all 9 Periods!!!

With this information, you will never need to memorize the principles or use any computer software.  The 24 Flying Star Maps x 9 Periods = 216 combinations are all ready for use!

I’ll release the Flying Star Maps progressively, this week you can download those for the most commonly used Periods – the 7th and 8th Periods.  Usually when we do Feng Shui nowadays the subject houses were built in either one of these two Periods.  So I have chosen them to be the first batch of Maps to release.  In the coming weeks you will see other Flying Star Maps of the remaining Periods.

This is how you read the Flying Star Map: In each box (direction) there are three numbers.  The two on the top are Mountain and Facing Stars.  The one at the bottom is the Period Star.  Please note that in a Flying Star Map North is always at the bottom, which is 180 degrees rotated when compared with the traditional “scientific” view.

Now, let’s go back to the main theme of this lesson.  Now you have the power to draw out a Flying Star Map, shouldn’t you also have the ability to interpret it?  You definitely should.  Let’s learn how to do so in this and the coming lessons.

A frequently asked question is whether there is a “best” Feng Shui direction?  To know the answer of this question, let’s learn what is a good Mountain Star and what is a good Facing Star.

It follows naturally that if a direction (i.e. one of the nine boxes on the Flying Star Map) has the current Period’s best Flying Star, it is a good direction.

Members please log-in to view. Not a member yet? Apply now for $1 only!!! Learn these master skills now![/contentbox]

This is 19th week’s content. Please wait until the 19th week of your subscription. Thanks. To summarize, the follow two are good Feng Shui directions:

These two situations may happen together, sometimes only the Facing or Mountain happens, it depends on the Period and Orientation of the house.  If both happens at the same time, we call this orientation a “Jewelry Orientation” (some people call it “Jewelry Line”).  From the name of this orientation you know how good it is.

Jewelry Orientations are good but it doesn’t mean that they are always good.  There are pre-requisites to make them good.

The best situation is when the external environment is favorable.  For the Mountain Star Direction, there should be a real mountain so that the mountain effect could be realized.  The second best choice is to have a taller building in this direction.

For the Water Star Direction, there should be natural water there, preferably a sea, lake or pond.  If not, an artificial pool or fountain would do.

What if there is no mountain nor building?  Then we create the same right inside your house.  How?

Similarly, for a Water Direction where the current year’s best Flying Star is found as the Water Star, you can place an artificial water fountain, column or aquarium there.  This time, though, you don’t need to put eight aquariums here, because water is uncountable, right?  Just put one would be enough.

The Benefits of Mountain and Water Stars

Now I have shown you the best orientations that have the matching Stars in the Mountain and Water Directions, and I told you how to utilize them.  The remaining question is what benefits exactly do these Stars bring?

According to Chinese Feng Shui theories, the Mountain and Water Stars have different functions.  There is a saying that “Mountain governs health and people while Water governs money” (山管人丁水管財).  So if you can properly use these two stars, you can bring good health and wealth to the occupiers of the house.

For mountain, usually we use this direction for a few purposes.  Firstly, if there is anyone in the family who have suffered from sickness for a long time, or have health conditions like cancer, we always suggest that person to move his/her bed to the Mountain Direction where the current Period’s prevailing Flying Star is the Mountain Star.

Secondly, if the family wishes to welcome a new member, we could ask the couple to move their bed to this direction, so that they would have higher chance to successfully conceive a baby.  As I said the mountain governs health and people, the people here could mean family members.

Thirdly, even if not necessary, we recommend the occupier of a house to move the bed to this direction so that he/she could have the best health possible.  It also means good concentration at work/study so why not maximize the use of this direction.  As I said, only some orientations in some Periods have the Jewelry Line, it is as precious as gold and diamond.  If luckily you can have the chance to use it, you should not let go this chance.

Water brings wealth to the occupiers of the house.  We try to assign all money-generating activities to the Jewelry Water Direction if possible.  For example, if we study the Feng Shui of an office, and we found that luckily the office’s orientation is a Jewelry one, we should put the profit-generating department in this direction, with an artificial water feature as necessary.

Even if it is your home, you could also maximize the use of this direction, you can either put your desk there or have the entrance door there.  Certainly, a water feature would make the setting more useful.

So this is about all we shall cover this week.  You have came to see the most valuable Feng Shui directions, the Jewelry Orientations, that could bring health and wealth.  Unfortunately not all houses could make use of these orientations.  In the next lesson, we will learn other good combinations of Flying Stars that you can use.  Stay tuned!