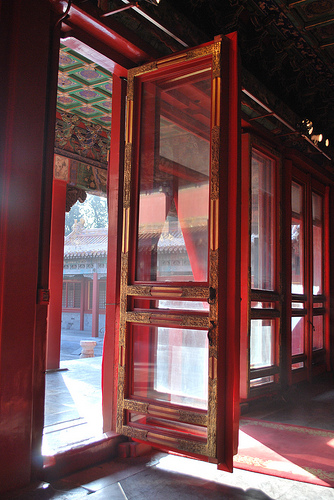 Door threshold is common for doors separating the external and internal areas, as well as for those doors between the kitchen/toilet and the living room.  But do you know it is also a Feng Shui tool?  Yes it is!

In the past, door threshold was mainly used for protecting the house from ingress of water in Chinese societies.  This is why door threshold is particularly common in Southern China, because the average rainfall in this area is more than Northern China.  No matter rain drops or water flooding, a high door threshold could serve as a very good protection.  Sometimes a door threshold at the entrance could be as tall as a feet (i.e. around 330mm).  These thresholds are not good for people’s use because you may be knocked down by it easily.  However, the risk of flooding was high in the past, so people had to design such tall thresholds. Nowadays, door threshold has less practical use in modern residential units.  Many people live in multi-storey apartments where the common corridor/lobby on each floor is also an internal area where no rain water could get in.  Even for detached houses, the risk of water flooding in modern cities would be low.  So the door threshold is seen by many as having decorative use only.

You may wonder how the door threshold could be so magical that it could detect the type of Chi and block negative Chi while allowing good Chi to move in.  Could the little door threshold be so powerful?  Yes, but not without something else. There is a Feng Shui tool called “Coins of the Five Emperors” (五帝古錢 in Chinese).  This set of coins are old coins that were produced when five particular emperors were running the Qing Dynasty (清朝 in Chinese).  This period was regarded as the most thriving period in that Dynasty.  These coins were used by numerous people, so that have the Chi and power of people.  According to Feng Shui theories, these coins has the power to purify the energy in the space.  They could also filter out bad Chi.  In the past, when people build the door threshold they would firstly lay these five coins on the ground before covering them up with the threshold stone.  With these coins, the threshold would have the power to filter out negative Chi and retain positive Chi.  Simply put, door threshold Feng Shui is not about the threshold itself but how we make it powerful by using Feng Shui techniques.

Nowadays, you can buy these coins from Amazon.  However, it would be quite troublesome to take down the threshold, add the coins and re-install the threshold.  Still, we could use “modern Feng Shui” skills to make the threshold complies with Feng Shui principles.

Firstly, ordinary threshold should have at least 1 inch tall.  If your entrance door faces the stair or elevator, you should heighten the threshold to enhance the power to curb the loss of wealth.

Finally, do not choose dark color for the threshold.  You should use bright and light colors.  Red color should also be avoided because it resembles fire.