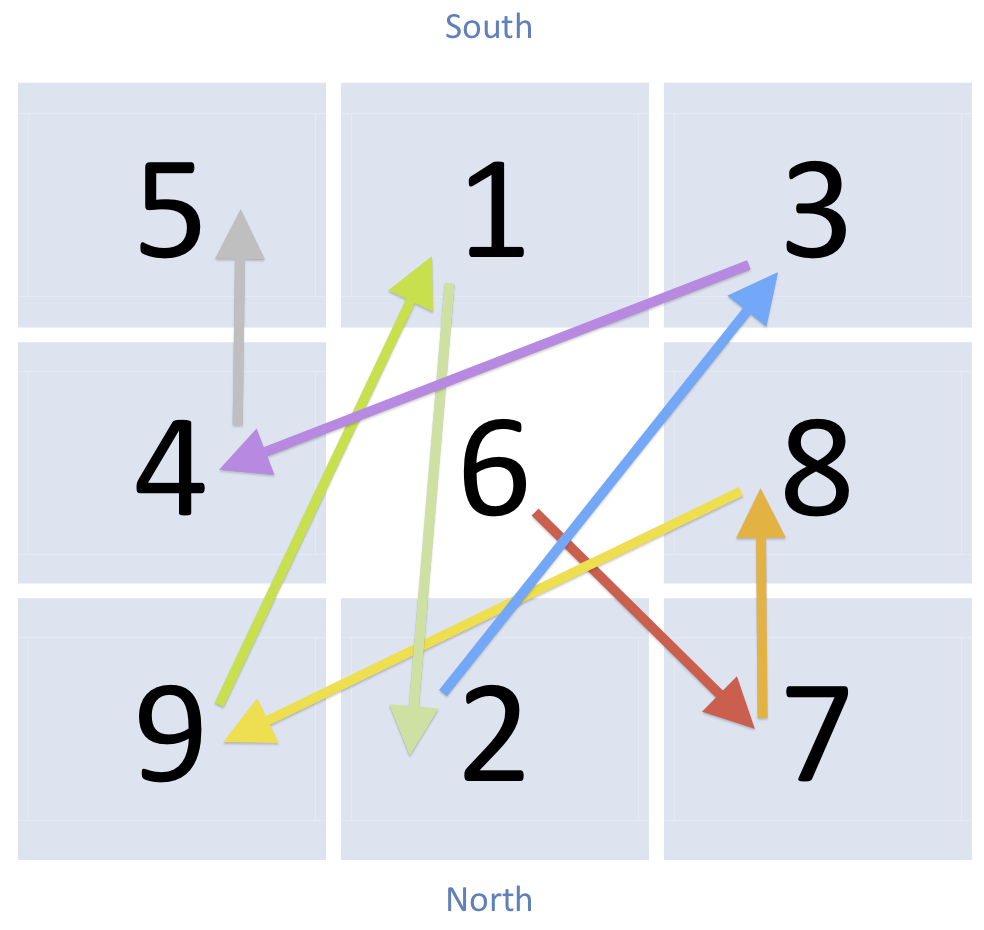 In the last lesson we learnt how to determine the Period (Yun) of a house, this time let’s begin going deeper into Flying Star Feng Shui.

Do you remember the image I showed you last time?  In this image you can find a Flying Star Map.  There are nine boxes in this map aligned in 3 x 3 grid.  In each box there are three numbers, two on top and one at the bottom.  This is the typical Flying Star Map that most Feng Shui masters deal with everyday. At first this kind of Flying Star Maps may seem difficult to understand, but as your skills grow you will find them easy to read and draw.  There will be a few lessons spent on how to “draw” a Flying Star Map like this, followed by a few more lessons on interpreting the Map.

Why do you need to learn this complicated Flying Star Map?  After 16 lessons, you should now understand Feng Shui is much much more than putting which color in which direction, or which zodiac sign likes which shape of house.  In Feng Shui there involves a lot of calculations.  You must know which three Flying Stars are in which direction, then know the chemistry (interaction) among the three, before interpreting the good and bad of the directions.  So, knowing how to draw the map is the first step of learning Flying Star Feng Shui.

Among the three stars in each box, the bottom star is the easiest to understand.  It is called the Period Star, or Yun Star in which “Yun” means 運 in Chinese.  Remember there are nine Periods (Yuns) in three cycles and they repeat endlessly? Simply put, you should assign the Flying Stars in ascending order following the arrows above, starting from the center box.  In the above example, Flying Star 6 occupies the central box as the Period Star, so it should be the Flying Star Map of a house built in the sixth Period (Yun).

For example, for a house built in the seventh Period, Flying Star 7 will be the central Period Star.  The Period Star of the Northwest box will be 8, 9 in West, 1 in Northeast, 2 in South, 3in North, 4 in Southwest, 5 in East and 6 in Southeast.

Try practicing the above sequence until you can remember and do it by yourself.

The Mountain and Facing Stars

Mountain Star, 山星 in Chinese, carries exactly the literal meaning.  It is the “mountain” in a particular box.

Members please log-in to view. Not a member yet? Sign up now for just $1!!! Learn these and many other Feng Shui techniques that only masters use![/contentbox]

This is 17th week’s content. Please wait until the 17th week of your subscription. Thanks.

For the time being, let’s first assume that each of the nine boxes in the Flying Star Map is an individual house.  There should be a facing direction and a mountain (backing) direction.  We represent each with a Flying Star.  So there will be a Facing Star and a Mountain Star.

Why?  Because for Mountain and Facing Stars, they could be allocated either in ascending or descending order.

Thirdly, it is an accustomed way to present the Mountain, Facing and Period Stars in the 2 on top and 1 at the bottom manner.  Whenever you see a Flying Star Map in this manner, you can confidently say that the left Star is Mountain, right Star is Facing and bottom Star is Period.  And if you draw a Flying Star Map, try to follow this tradition so that you and other Feng Shui masters could follow easily.

The Interpretation of the Stars

In Chinese Feng Shui there are two basic methods (and a few advanced ones too) of interpreting the Flying Stars.  We will go into these details in later classes.  Today let us first have a glance of what we might do with the Stars.  Let’s look at this Flying Star Map again:

Our first focus are on the Facing Stars.  The Facing Stars are sometimes called “Water Stars” 水星 in Chinese, and water means money.  So by utilizing the good Facing Stars, we can bring in good money to the occupiers.

However, in 2004 the eighth Period arrived, from 2004 to 2023 Flying Star 8 became the luckiest Star and 7 lost its glory.  South, where the Facing Star is 8, became the luckiest direction for wealth generation.  If you bought a house before 2004 and enjoyed a period of good luck, chances are the luck faded out since 2004 because the lucky Flying Star changed.  It is the Feng Shui master’s job to adjust the interior design to maximize the use of the prevailing lucky Flying Star.

For Mountain Star, we usually consider it as a Star for health.  Using the principle outlined in the last two paragraphs, Flying Star 8 in the Mountain position is good for health in eighth Period (2004 to 2023).  So Southwest is the healthy direction during this Period.

If you were a Feng Shui master, you would ask your client who owns this house to sleep in the Southwest corner of the house, and if possible have the entrance door in South.  Alternatively, place a water feature in South to capture the lucky energy for money.

The above is the (over-)simplified explanation of how Feng Shui masters draw and interpret a Flying Star Map.  But we haven’t learnt how to find out the Mountain Stars and Facing Stars right?  We shall learnt these in the coming lessons.

One thought on “Mountain, Facing and Period Stars [Master Class 17]”