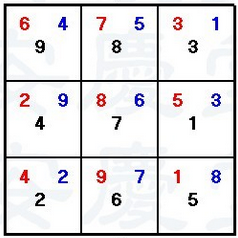 Welcome back to Feng Shui Master Class, this is the 16th lesson.  This time I am going to teach you how to determine the period, a.k.a. (運), of a house or flat.  This is an important step in doing Flying Star Feng Shui. You will learn how to draw out a Flying Star Map like this in the coming weeks, but for today lets first get to know how to find out the exact Yun when a house was built.

In Lesson 12 I have explained the basic concepts of the three Yuan’s and nine Yun’s (三元九運).  Some people like to use the direct translation of the Chinese 運 as Yun, some other people prefer saying the meaning, i.e. Period.  Some members told me that they’d rather know the meaning than the pronunciation, so in this lesson I shall use the term ‘Period’, which is the same as the ‘Yun’ explained in Lesson 12.

A Period Lasts for 20 Years

Usually for doing Feng Shui for modern buildings, we only need to know the timing of the fifth to the eighth Periods, because most modern buildings were built during these Periods.  Especially in places affected by the Second World War, most pre-War buildings were already gone.  However, if the building you want to examine was built before the fifth Period, you could do the calculation yourself because each Period lasts for 20 years.  So you can easily find out in which Period the building was built by counting how many multiples of 20 years the building was built before the current year.

A Period Does Not Begin on 1 January

I think most followers of this blog knows that for Feng Shui purpose a year does not begin on 1 January.  And it does not begin on the first day of the Chinese new year.  It begins in Spring, which for most of the time happens on 4 February.

The same applies to the beginning of a Period.  When we say the eighth Period began in 2004, we mean it began on 4 February 2004.  If a building was built on 7 January 2004, it was not built in the eighth Period but the Seventh.  Even if the building was built on 28 January 2004, which is the seventh day of the Chinese New Year, it was still not considered as a eighth Period building.  The reason is that the Gregorian Calendar, Chinese Calendar and ‘Feng Shui Calendar’ are three sets of systems.

As I said, Spring ‘usually’ comes on 4 February but not always.  Sometimes it comes on the 5th and sometimes the 3rd.  For example, in 2017 spring will begin on 3rd February.  You can rely on the internet to find out the exact date (and hour and second) of Spring in a particular year.  In Chinese we call Sping as ‘Li Chun’, you can search for phrases like ‘Li chun in 1978’ in search engine to find out the date of Li Chun in that year.

To help you to determine the beginning time of the last few Periods, I listed them out below:

When was a Building Built?

The real problem that deserves a whole lesson to discuss is how to determine the time when a building was built.  There are several schools of theories, let me explain one by one.

[contentbox width=”550″ borderwidth=”0″ borderstyle=”none” bordercolor=”000000″ dropshadow=”0″ backgroundcolor=”F5C9C9″ radius=”0″]The detailed explanation of different theories of the ‘birthday’ of a building, and the method of changing the Period (Yun) of a building, are Master Class exclusive contents.

Members please log-in to view. Not a member yet? Sign up now for just $1!!! Learn these and many other Feng Shui techniques that only masters use![/contentbox]

This is 16th week’s content. Please wait until the 16th week of your subscription. Thanks.

The first school believes that we should count the time when the foundation was laid.  The reason behind is simple, the most important part of a building is the foundation.  Without a foundation a building could not last.  So a properly laid foundation is the key to good Feng Shui.

Another reason why this theory sounds reasonable is that in Feng Shui we examine the flow of energy.  People believe that the Di-chi (地氣), a form of energy, comes from the ground (the word ‘Di’ literally means the ground), so the timing when the foundation was laid marks the time when energy firstly enters the building.

Of course, we still need to ask a question, when does a foundation being considered as laid?  For this most people would turn to the first day when the foundation work begins, because this is when the building begins to connect to the ground.

This theory is not without problem.  The construction progress of a building, particularly for modern buildings, could span over 2 or more years.  Does the topping-out moment really controls the fate of a building?

Some advocates of the ‘foundation theory’ thinks that the time when foundation is laid is like the birthday of a man and topping-out is like the child finished his/her education and is really to take full responsibility of his/her life.  How can you use the graduation day to do fate prediction?

This theory is also subject to critics.  The first logic problem of this theory is that the occupants on different floors may start to live in the building at different times.  It would be absurd if different floors/units of a building have different birthdays.  Besides, would it be real that if a building was vacant since construction for 20 years before it was occupied, then the birthday of that building will fall into the next Period?

The birthday of a building is usually not a problem, unless the subject building’s construction period spans over the changeover of two Periods.  But what if it really happens?

In fact, there is no definite answer to this question.  To my knowledge, most Feng Shui masters follow the second principle, some believe in the first and only very few use the third theory.  The reason behind is mostly because masters believe a building does not complete not until it tops out.

Can I Change the Period of a Building?

Let’s clarify the question.  If a building was built in the seventh Period, we draw out the Flying Star Map according to the seventh Period Flying Star combinations.  Even when it now comes to year 2005, the Flying Star Map would not change.  In other words, a building’s Feng Shui is somewhat like the fate of a person, once a person is born and we predict the life of him/her based on the birthday, the fate would not change because the birthday is unchanged.

So, it seems that you cannot change the Period of a building because it was determined when the building was completed.  But in reality some Feng Shui masters would help their clients to do so, in case the Feng Shui of the house is bad.

This is a process called Huan Tien Xing (換天心).  The theory behind is that, if you overhaul a building to a great extend, that most of the areas of a building were changed, the birthday of the building is changed.  It is just like replacing most organs inside the body of a person, so it follows naturally that the person has a ‘new life’.

In practice, this is not easily be done.  Some masters would say simply by hanging the stove the Period would change.  Others say that you need to change the entrance door.  These are all inaccurate.

In the past when most people live in detached houses (in other words, no multi-storey apartments), the process involves opening up the roof of the building to let sunlight (and energy) goes into the house.  This would last for a long period, usually not less than 49 days.  In this way, a building will breath a new life and the new birthday would be the completion day of the Huan Tien Xing.  A new Flying Star Map based on the current Period would be drawn.  Feng Shui masters in the past would do this only if they have pre-estimated that the new Flying Star Map would be better than the old one.

So, if you live in an apartment, do not ever dream of changing the Period, because you cannot do the same to such a high building without affecting others.  But if you happen to live in a detached house, you may try this method.

The reason I spent several hundred words in Huan Tian Xing is that occasionally you may come across this situation.  If you check the Feng Shui of a house, you should ask if the building had been fully renovated before or not, and the scale of the renovation.  It could happen that the building was unintentionally fully renovated to an extend that the ‘birthday’ has changed.  If that happens, you need to use the new Period to draw the Flying Star Map, otherwise everything would be wrong.  This could happen for old buildings with decades or more of history.

Sorry that there aren’t many pictures in the lesson, because this is a boring topic.  This is, however, a very important lesson, because you must know how to determine the birthday of a building before you can draw out the full Flying Star Map.  We will soon begin to learn how to do so, keep following the lessons!