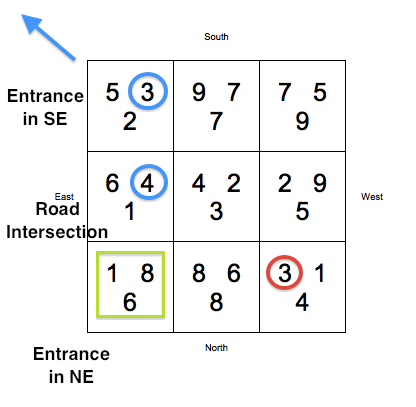 Welcome back to the Feng Shui Master Class.  In the last 28 weeks, i.e. 7 months, we have learnt the essence of Form Feng Shui, Ba Gua Feng Shui and Flying Star Feng Shui.  The information provided in these classes is much more than many other Feng Shui books or tutorials you can find online.  If you have been paying attention to all the information provided in these classes, you should be able to regard yourself as a Feng Shui practitioner already, you know much more than many Feng Shui do-ers out there.

But “to know” is different from “to be able to”.  A person who have read all Wikipedia pages (if such person could ever exists) is not necessarily the more powerful problem-solver on earth.  He must know how to apply his knowledge.  This is the objective of our coming lessons.

Starting this week, we will see many real Feng Shui cases.  These cases happened in different times, as old as in early 20th century to as new as recent years.  The topics covered include health, fame, wealth, study, etc.  From these cases, you will see how Feng Shui could be applied in different scenarios, and how Feng Shui should be used “flexibly”.  Although you may not have the chance to practice Feng Shui everyday like a pro, from these cases you can nevertheless step in the shoes of Feng Shui masters and think how Feng Shui theories could be translated into real strategies to implement.

This case happened in Shanghai, China, in the 3rd Period (from 1904 to 1923).  The concerned building was occupied by a shop that sold candles (at that time candles were the major tool for illumination, candle production was a big business).  In this Period, the prevailing Flying Star was 3, followed by 4 and 5.

The orientation of this building was Mountain Xu Facing Chen (坐戌向辰 in Chinese), i.e. Facing Southeast Backing Northwest.  The Flying Star Map looked like this: There are a few geographical features I need to state here.  The entrances of the shop were in Northeast and Southeast east.  There was a road intersection in East, where three roads met each other.  That intersection was very busy with thousands of people passing by everyday.

How would you analyse this case, if you were the Feng Shui Master hired to offer advice?

[contentbox width=”550″ borderwidth=”0″ borderstyle=”none” bordercolor=”000000″ dropshadow=”0″ backgroundcolor=”F5C9C9″ radius=”0″]The preview of this lesson ends here. Members please log-in to review this and another case about Jewelry Orientation and Double Stars to Water. Not yet a member? Apply now for $1 only!!![/contentbox]

This is 29th week’s content. Please wait until the 29th week of your subscription. Thanks.

The orientation was supported by actual site condition.  In Southeast there was an entrance for the shop, so the positive energy brought by the prevailing Water Star 3 in this direction could be brought into the shop.  Since Water Star is good for wealth generation, it could be determined that this shop should have good business.

Secondly, there was a road intersection in East.  East is the direction where Flying Star 4 was the Water Star.  In Feng Shui road is considered as artificial stream of water.  The intersection of water streams is considered a very good source of wealth, because the dynamic water that meets could bring unlimited supply of positive energy, unless the roads are rarely used with very few users.  The more people there the better the effect is.  In our case, the intersection was very crowded.

So in conclusion, this shop was opened at a place with very good Feng Shui.  Particularly since there were two entrances, both opened in good directions, I would believe that the owner of the building knew Feng Shui or he hired a Feng Shui master to do so.  No wonder this shop was the biggest candle shop in Shanghai at that time.

The Future of This Shop in the 4th Period

This case was recorded in a classic Feng Shui book.  The book did not tell the end of the story after the 3rd Period, but we could make a forecast simply by reading the Flying Star Map.   When the 4th Period came in 1924, the original prevailing Flying Star 3 would lose its glory and become a bad luck star.  Even so, I believe the shop would not be significantly affected.  There are two reasons.

Firstly, the road intersection at East would then have the most prevailing Flying Star 4 as the Water Star.  So the positive effects of this intersection would actually be stronger.

Secondly, the 1 – 6 – 8 combination still exists in Northeast where there is an entrance.  No matter in which Period, this combination is a good one that brings wealth.  I believe having an entrance in this direction was probably the smart design of a Feng Shui master or architect in hope of keeping the building thriving in all Periods.

The lesson-learnt in this case is that, the Flying Stars and the site condition are equally important.  Even if there is a Jewelry Orientation, if the facing direction has no entrance or road intersection, the positive effect would be very limited.

The subject building was occupied by a shop selling fried beans.  According to classic Feng Shui books, the owner of this shop managed to accumulate tens of thousands of money.  This was a huge sum at that time which was sufficient to buy several blocks of houses along a street.

What made this shop so successful?  Let’s look at the Flying Star Map first. This shop enjoyed three Feng Shui advantages.  Firstly, this was a typical Double Stars to Water scenario.  The building was built in the 3rd Period, Flying Star 3 was the prevailing star that could bring the best luck.  The facing direction of the shop was Southwest, which was good for wealth generation because of the presence of the Flying Star 3 as the Water Star.

Secondly, there is an entrance in Southwest.  The entrance could absorb and bring luck of the Flying Star 3 to the shop.

Thirdly, there was a busy street, Shi Xiang Gong Street, in the Southwest direction.  As explained above, a busy street could bring loads of positive energy to a shop.  With this street in the Double Stars to Water direction, it could be easily told that the shop must have thriving business.

The lesson learnt in this lesson is that the entrance matters.  Unlike Case 1 where there were two entrances for the same shop, in this case there was only one entrance.  The selection of the entrance would be very critical, since there is no second choice.  After 20 years, when Flying Star 3 is no longer prevailing, the shop owner would need to consider opening another entrance in a prevailing direction in the 4th Period.

This week we have reviewed two cases that relate to two major orientations we learnt previously, i.e. Jewelry Orientation and Double Stars to Water.  From these two cases you could see how we could maximize the use of these two lucky orientations.

Next week, we shall learnt other new things from other new cases.  Stay tuned!